Springs of the Great Deep, Floodgates of Heaven, and the Ice Age Youth Bible Study

Brief: Where did all the water come from, and what happened to it afterward?

Genesis 7:1-4: The Lord then said to Noah, “Go into the ark, you and your whole family, because I have found you righteous in this generation. 2 Take with you seven pairs of every kind of clean animal, a male and its mate, and one pair of every kind of unclean animal, a male and its mate, 3 and also seven pairs of every kind of bird, male and female, to keep their various kinds alive throughout the earth. 4 Seven days from now I will send rain on the earth for forty days and forty nights, and I will wipe from the face of the earth every living creature I have made.”

Genesis 1:29-30: Then God said, “I give you every seed-bearing plant on the face of the whole earth and every tree that has fruit with seed in it. They will be yours for food. 30 And to all the beasts of the earth and all the birds in the sky and all the creatures that move along the ground—everything that has the breath of life in it—I give every green plant for food.” And it was so.

But before the Flood, people were not allowed to eat animals, right?

Genesis 9:1-3: Then God blessed Noah and his sons, saying to them, “Be fruitful and increase in number and fill the earth. 2 The fear and dread of you will fall on all the beasts of the earth, and on all the birds in the sky, on every creature that moves along the ground, and on all the fish in the sea; they are given into your hands. 3 Everything that lives and moves about will be food for you. Just as I gave you the green plants, I now give you everything.

After the Flood, God gave Noah permission to eat animals.

But the question now is, Could Noah have fit that many animals on the ark? Could he have taken 14 of every kind of clean animal and 2 of every unclean animal? Was there room on the ark?

Could Noah have fit every “kind” of animal he needed on the ark? (Yes.)

Remember that a kind of animal is cat, dog, bird. It’s not panther, lion, cheetah, tiger. Cocker Spaniel, Great Dane, Yorkie, German Shepherd. A kind is animals that can reproduce together.

Genesis 7:5-12: And Noah did all that the Lord commanded him.

6 Noah was six hundred years old when the floodwaters came on the earth. 7 And Noah and his sons and his wife and his sons’ wives entered the ark to escape the waters of the flood. 8 Pairs of clean and unclean animals, of birds and of all creatures that move along the ground, 9 male and female, came to Noah and entered the ark, as God had commanded Noah. 10 And after the seven days the floodwaters came on the earth.

11 In the six hundredth year of Noah’s life, on the seventeenth day of the second month—on that day all the springs of the great deep burst forth, and the floodgates of the heavens were opened. 12 And rain fell on the earth forty days and forty nights.

Why do you think the Bible tells us the exact day that the Flood started? (To let us know that this is actual history and not just a made up story.)

Let’s start with the “springs of the great deep.” What is that?

When the Bible talks about the “great deep,” it’s talking about the ocean. Remember that in the beginning, there was only one continent and one ocean.

Genesis 1:9-10: And God said, “Let the water under the sky be gathered to one place, and let dry ground appear.” And it was so. 10 God called the dry ground “land,” and the gathered waters He called “seas.” And God saw that it was good.

When God created the world, He created it as one continent and one ocean.

We call that first continent Pangea. (Show your picture of Pangea.)
At the time of the Flood, the springs of the great deep burst open. Those bursting points we now call mid-ocean ridges. Mid-ocean ridges exploded with hot groundwater and lava. The bursting open of the mid-ocean ridges set off the process known as plate tectonics. The mid-ocean ridges pushed out from either side, causing Pangea to break apart and forcing the separate continents to move away from each other. (Show your plate tectonics picture.)
As the mid-ocean ridges push continents apart, it also pushed them into plates in the earth’s crust. When two plates collide, the crust of the earth buckles, crumpling up and forming mountain ranges or volcanoes. The Ring of Fire (show your plate Ring of Fire picture), surrounding the Pacific Ocean, shows the world’s largest concentration of volcanoes. It is caused by the mid-ocean ridge in the Atlantic Ocean pushing continents from either side toward the Pacific Ocean.
So that’s the waters of the great deep and the effect they have: hot groundwater exploding from the earth’s crust and setting off the process known as plate tectonics.

Now let’s look at the floodgates of heaven. What does it mean by that?

Genesis 1:6-8: And God said, “Let there be a vault between the waters to separate water from water.” 7 So God made the vault and separated the water under the vault from the water above it. And it was so. 8 God called the vault “sky.” And there was evening, and there was morning—the second day.

The expanse, or the sky, was a hydrosphere, a bubble, a layer of water, that completely surrounded the earth. What would a hydrosphere like that do for the earth? What effect would it have?

This hydrosphere kept the earth at a constant, ideal temperature. It protected it the earth from UV rays and had other beneficial effects on the atmosphere of the earth.

Genesis 2:4-6: This is the account of the heavens and the earth when they were created, when the Lord God made the earth and the heavens.

How was the earth being watered in the beginning? (By dew or streams from the earth.)

The Lord had not sent rain on the earth because all of that water was still up in the hydrosphere.

Genesis 7:11-12: In the six hundredth year of Noah’s life, on the seventeenth day of the second month—on that day all the springs of the great deep burst forth, and the floodgates of the heavens were opened. 12 And rain fell on the earth forty days and forty nights.

When God sent the Great Flood, all the springs of the great deep, the ocean trenches that we talked about, and the floodgates of the heavens were opened. In other words, the expanse or the hydrosphere broke down and all that water that was surrounding the earth came falling down.

Let’s look at one of the effects that the breaking down of hydrosphere had on the lives of the people. Turn to Genesis 5. Call out some of the numbers that you see for people’s total lifespan in years. This is how long people lived before the Flood, or before the hydrosphere broke down.

The hydrosphere affected our atmosphere. It is guessed that the breaking down of this extra layer of the earth’s atmosphere is what caused people to start living a shorter amount of time after the Flood.

I also said before that the hydrosphere kept the earth at a constant temperature. This means that there would have been no seasons before this hydrosphere broke down. But now, after the hydrosphere has been broken down, we do have seasons.

Genesis 8:22: “As long as the earth endures, seedtime and harvest, cold and heat, summer and winter, day and night will never cease.”

Now there’s only one question left. We saw where all the water came from. It came up from underground exploding out of the ocean trenches, and it came down from the hydrosphere. But after the Flood, where did all that water go?

Some of the extra water from the Flood went back into the earth as groundwater. Some of it remains in the clouds. And some of it became the ice glaciers and then the ice caps at the north and south poles. 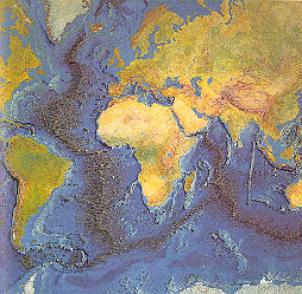 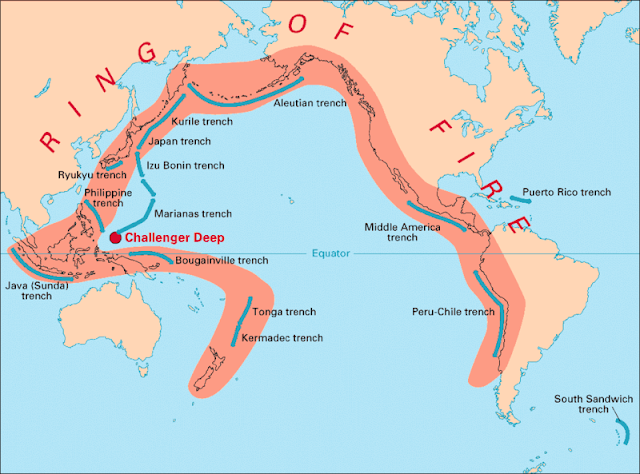 
This lesson is included in my book, Created: Youth Bible Studies on Genesis 1-11 and the Book of Job.