Use this Valentine’s Day children’s sermon to teach kids about the faith of the historical Valentine.

Needed: a Valentine’s Day card, candy hearts, or another item that represents the holiday, a picture of Cupid

Children’s Sermon: Ask students, Who knows what holiday is coming up? (Valentine's Day.)

What is Valentine's Day about? (Love.)

(Show your item and talk about it for a moment.)

Did you know that Valentine's Day is named after a real person? Does anyone know who Valentine was?

(Show your picture of Cupid.) Valentine looked like this. He was a little angel baby that shot arrows at people to make them fall in love.

Just kidding. Valentine was a man.

A long time ago in Rome, it was illegal to be a Christian. If you were a Christian, you would be arrested and killed. It was against the law to believe in Jesus. It was also against the law for soldiers in the Roman army to get married since they would always have to leave their wives at home when they went to war.

When the Emperor found out that Valentine was a Christian and was helping soldiers get married, he arrested Valentine and had him killed.

So, we celebrate Valentine's Day to remember Valentine's courage to be a Christian and to help people enjoy God's gift of love to us and get married.

Closing Prayer: God, we thank You for the gift of love, and we thank You for Valentine's bravery to believe in You even when it was against the law. We pray that we would all be brave for You like Valentine was. In Jesus’ name we pray, amen.

Valentine’s Day Jokes for Kids – Chrissy Veong collects some very clever but cheesy jokes in this handy book. It’s good for “warming up” your crowd as both kids and adults will get a kick out of the jokes.

Valentine’s Day Wristbands – an alternative to those sugary candy hearts 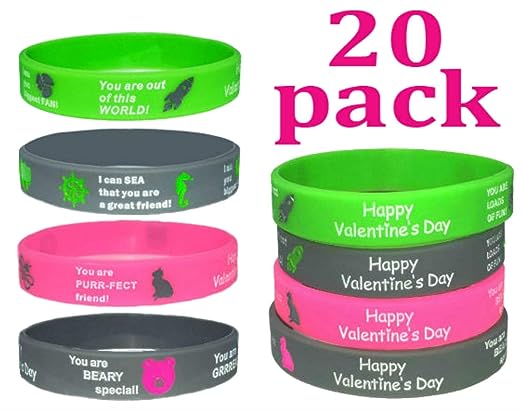